WATER BRASS ART: An Introduction to my Artwork

I made this discovery, that I call an art form.

The pictures I create are made by a unique process, using the energy in water. 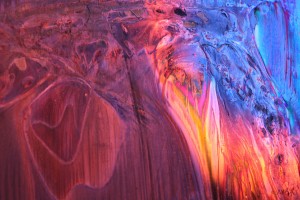 When I say energy, it includes physical properties such as the generation of a static charge in water that through contact affects the surface of the material it runs over.

A few years ago I was experimenting with vortexes.

When water drains out of your bath it makes a shape that is called a vortex and has amazing geometry inside as the water flows in its spiral down the drain.

To see the shapes I built my own vortex generator.

Many people when they are exploring the vortex use coffee grounds or particles that float in the water and introduce these into a fluid spinning as the vortex does.

Instead of doing this, I used inks, dyes and natural food colourings. I injected these using a syringe from ink jet refill kits.

At some point in time, I injected this ink into the outflow from the vortex and the ink travelled upwards against the flow. This upward flow didn’t follow the shape of the vortex but made parallel sided cylinders many of them, lots of them.

This leads toward a particular education in atomic physics because this applies to the control of plasmas in vacuums that produce lift and movement; Inverse gravity and other free energy devices. 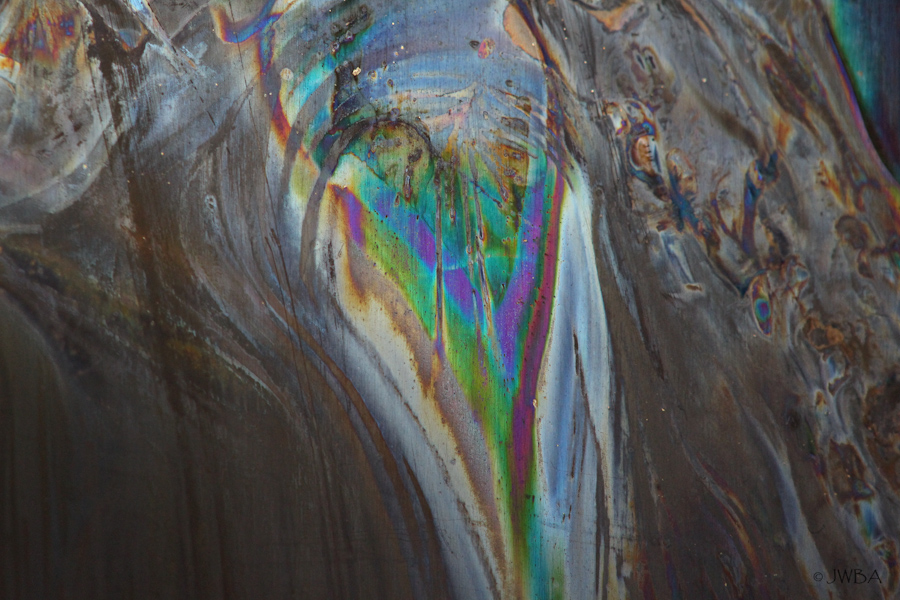 The construction of my vortex was simple I used a coke bottle (having used the contents to clean engine parts and as a weed killer) cut the top off and arranged 5 points of injection through narrow brass tubes from a hose attached to my outside tap.

The 5 points were at an equal distance round the top of my bottle. I split the jets using car windscreen fittings.

I knew there is a charge in water especially when it is moving or under pressure because of Lord Kelvins “Thunderstorm experiment”.

To experiment with this flow I decided to short out, electrically, all the nozzles (join them with a brass strip) and see if there were any volts I could measure on a meter, so I put a narrow brass strip round the top, I did my measurements but forgot to remove the brass strip. Two days later I noticed marks on the brass and removed it and there were markings like sand dunes; a pattern on the brass formed by the water. This was ‘accidental’ or serendipitous. My intuition guided me to work with this, and these brass pictures are in part the result. I say in part because there is another aspect to the pictures which is rather magical. I have shown them to Harry Oldfield and we used his PIP camera on them and there is something else in them as if the water spirits or devas like these.

In writing this I am compressing 3 years of time.

The point of this is that, the pictures are not just a repeatable experiment.

MY INTRODUCTION TO WATER

When I was four years old, I was with my parents on a friends land; there was a spring nearby where I sat playing; floating things in it and experimenting for hours.

I never forgot that experience.

My father is well known in the canoeing world; he wrote 5 books on the subject and was one of the first senior instructors for the BCU (British Canoe Union). Due to this influence I took up the sport.

I learned to sail and dive (SCUBA) at Atlantic College. After college I was a white water instructor in Norway and ran many training courses on rivers in Norway and Sweden. I learned to look at water in all its forms, mainly in rivers and streams.

Water is a living thing, with movement and numerous structures within it, some structures only appear when it is moving and because of this movement an electrical charge; the faster the spin the higher the charge.

I work with this principle on many levels to produce this art. The many levels will become apparent as you explore my site and blogs. I find that Water Brass Art is not an end itself because it spawns many creative processes, including work with crystals, writing poetry and insights into how nature works her magic and a communication with her.

All my Water Brass pictures have differing natures because of and due to my own energy, as well as the volume flow, speed of flow and other variables. This is used to explain how electricity works in that the volume refers to Amps and speed or pressure to Volts.

Most of these pictures take 30 hours to develop many a lot longer, the longest so far is Shrine No.9 picture @ 215 hours.

Any picture you may take of water in this way would all be unique but the true worth of this method only became apparent by my meeting and many talks with my partner, Isis St Germaine, and other people that have said “you have got to get this out there John”.

The pictures have and are evolving, because my understanding is doing the same. Without doubt, I would not have discovered this method without my great interest in subtle energy, resonance, cymatics and power generation from water using free energy machines mainly through the work of Victor Schauberger.

Some pictures are created with an intention, such as:

For example, one was a disc of brass under the outfall from a pipe to capture the Pleiadian eclipse of 19/05/2012.

Masaru Emoto has proven that intention effects water; earlier work by Jacques Benveniste shows water has a memory. Benveniste worked on homeopathy where remedies are diluted to such a degree nothing of the original water is left such as one drop in a gallon then repeated 5 times. Prof. Emoto develops ice crystals obtaining different results from the same water source, the only change being the intention put into the water before the crystals develop.

Intentions are not accepted as a scientific method for making sense of our world and our own senses, even though we have seen that a wave collapses to a particle only if observed or under the effect of consciousness.

There does seem to be a language from and in water. Examples are:

One of my earliest pictures, which is the outfall from a vortex that I set up in my garden and placed a clean brass disc underneath. I called it “Eclipse” because it looks like an eclipse of the sun by our moon.

Another one is “Merlin”. This is a straight jet of water that generates high spin rate and thereby high charge and that produced the amazing colours you see. 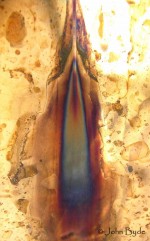 All the pictures have different intentions behind them. For example:

“The Stream Series” (see example “Atonement”) carrying only the natural energies of this place, leaving out me the human element. 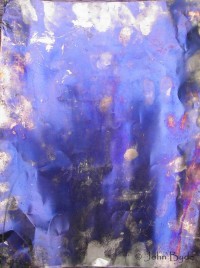 “The Mirror” sequence (see example “Youthful Crown”) which was interesting to create because the picture developed in obscurity; no light just the water. If there was any intention behind it, it would be ‘surprise me’ and I certainly got my wish. On opening the sections I was in awe; I had never seen anything like this before and the energy they carry is ‘out of this world’. This particular sequence stands out for the delight of opening the two pieces up and finding an image. After sitting with the images for a while a title emerges. Because they are a pair the energy is in reflection or twins. 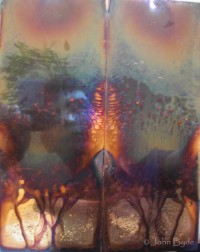 Furthermore, there are two states of Water Brass pictures:

~ In situ, covered in water.

~ Its dry state, with just the picture on the brass.

In its wetted state the light that makes the picture must travel through the water twice.

The light goes through the rippling surface hits the brass then comes back through the water.

The originals are preserved to stop any oxidation and can be used for further work.

These originals are very valuable because of the time and care put into their production.

Most of the Water Brass Art images on this site are available for purchase (see Purchase Guide).

Limited edition prints are signed by the creator, not God but me John Byde.

Water Brass Art images are often seen as tools for facilitation, empowerment and change; for example, people use these powerful art forms to work with at many levels in their meditations and shamanic journeys, others feed their creativity by just treasuring them on a wall.

Last but not least, Water Brass Art is not just my creation and art since I create it in collaboration with the amazing help of the water and other energies. It is a blessed dance of the consciousness of water on a highly receptive metal, creating ancient imprints of wisdom we all share within eternity.

To study water further, its flow and the effect it has on brass I decided to look at thin films of water. The reason for this is, although some brass sheets are totally submerged in water, the interesting patterns are found if there is some turbulence close to their surface.

To explore thin films I decided to use sheets of glass, dyes, colours, polarised light and other filters as well as small bubbles to help direct flows.

The results of these experiments not only helped with my understanding regarding the brass sheets but also produced the amazing art forms I have called Water Tank Art (see Gallery 3).